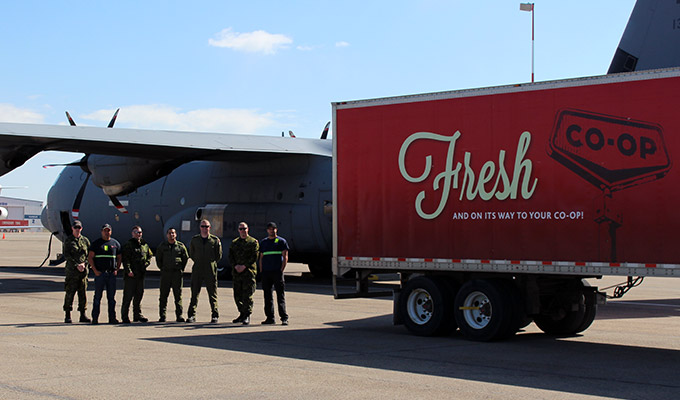 More than 80,000 residents were forced to evacuate Fort McMurray, Alta., and its surrounding areas in May 2016 to escape what has been dubbed the ‘The Beast.’ More than 2,400 homes and businesses were destroyed by a fire that covered more than 575,000 hectares.

Along with the rest of the country, co-ops in Western Canada rallied to provide disaster relief. Local retails worked extended hours to serve the influx of evacuees as they travelled south, with help from Co-op members, customers and a crew from FCL’s Edmonton Region.

FCL also worked to route products and fuel to locations, including local Tempos, to keep them from running out. FCL and The Grocery People helped load a Hercules military aircraft with fresh food after a call from the Alberta Emergency Management Agency less than 16 hours earlier.

Then there are the donations from retails, employees, Co-op members and customers. The Co-operative Retailing System across Western Canada donated over $800,000 in cash and in-kind donations in support of the relief efforts.

Co-ops donated fuel and products and held fundraisers. A young cashier from Leduc Co-op captured everyone’s heart when he paid for an evacuee’s groceries, an act that garnered positive reactions on social media.

La Ronge and communities in the surrounding area know the threat wildfires pose. In July 2015, 7,000 residents from communities in northern Saskatchewan were forced to flee raging wildfires.

Yet the Co-op Food Store Manager in La Ronge remained behind, camping in the parking lot, in order to supply firefighting crews and the 600 military personnel dispatched to help.

Prince Albert and Saskatoon housed evacuee centres, with Saskatchewan co-ops supplying products and donating to the Red Cross. FCL not only contributed to the Red Cross – as per it’s five-year, $1 million commitment – but its Saskatoon employees also volunteered at evacuation centres.