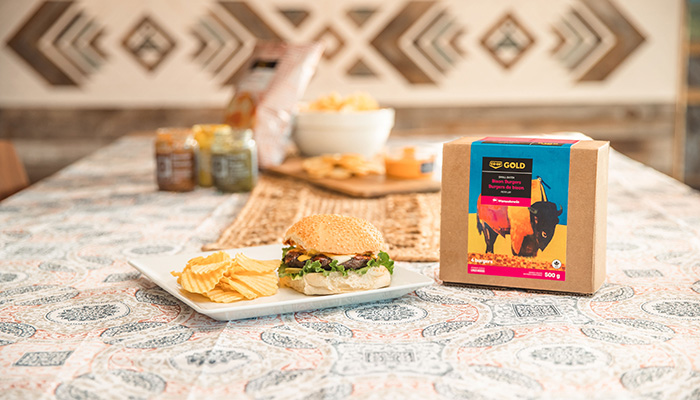 Co-op, in collaboration with Wanuskewin Heritage Park, has launched a new line of bison products in Co-op food stores across Western Canada with a portion of the proceeds going back to the non-profit park.

The bison are sourced in Alberta, the products are produced in Saskatchewan and sold across Western Canada. The packaging includes artwork by Linus Woods, an Ojibway-Dakota artist from the Long Plain First Nation in Southern Manitoba. With a portion of the proceeds staying at Wanuskewin to support cultural programming, all aspects of the project are uniquely Western Canadian.

“Co-op and Wanuskewin have a tremendous relationship and this is the next exciting step in our journey together,” said Heather Ryan, CEO of Federated Co-operatives Limited. “We are always pleased to find unique and creative ways to give back to our communities. The programming these proceeds will support is essential to moving toward a better collective understanding of Indigenous history and culture, and supports our commitment to Truth and Reconciliation.”

“No matter where you are in Western Canada, you’ll see our products and be able to learn a little bit more about Wanuskewin. This is reconciliation in action,” said Darlene Brander, CEO of Wanuskewin Heritage Park. “By answering those Truth and Reconciliation calls to action in creative ways like this, we elevate the understanding and appreciation of Indigenous cultures.”

The recipes for the products were developed at Wanuskewin and brought to life by the Co-op team, explained Sav Bellissimo, Store Brands Manager.

“Bison is so important in the Indigenous culture, so it was clear from the beginning that would be the backbone of the product line,” Bellissimo added. “Having our recipes developed externally is something we haven’t done before, but we tried them and loved them, so we ran with it.”