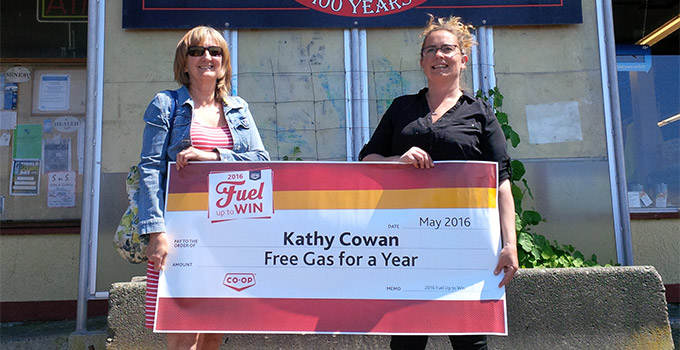 Kathy Cowan of Sointula, B.C., won free gas for a year in this year's Fuel Up to Win contest. Thousands of other Co-op members and customers, some of whom are pictured below, were winners of other great prizes and discounts.

Hundreds of winners in this year’s Fuel Up to Win

After another exciting Fuel Up to Win contest, hundreds of Co-op members and customers are kicking off summer with fantastic prizes fit for the season.

Almost 500 western Canadians were among the winners who took home food, fuel, barbecues and tools, as well as cash, gift cards and other prizes.

During the eight-week event, Co-op members and customers collected and traded millions of game tickets for use in this year’s Instant, Collect to Win, Online and Double Up Sweepstakes games.

In April, Jeffrey Allen, a member of Delta Co-op in Unity, Sask., claimed the $100,000 collect-to-win grand prize, which came with a $25,000 community donation that was shared by five local organizations.

Since then, Tara Westerson of Red Deer, Alta., joined the winners' circle. She earned the top prize in this year’s online game and won $35,000.

Now that the contest has wrapped up, the final tallies are in. Across western Canada, there were:

Thousands of other Co-op members and customers were instant winners of discounts or free products. For more details about this year’s winners and prizes, see fueluptowin.ca.