2021 Turnaround: An investment in safety and the local economy

Reflecting on one year of COVID-19 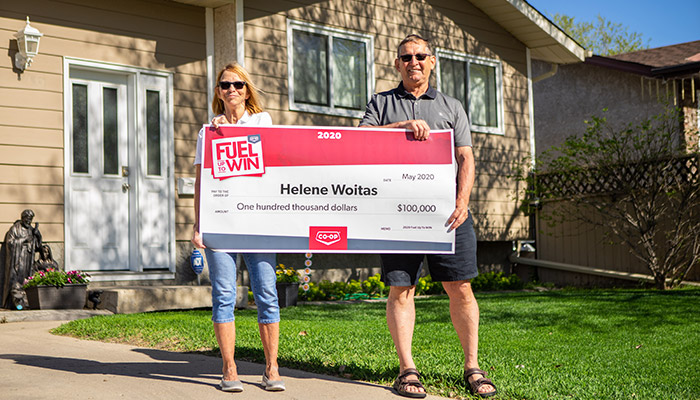 In something of a Prairie fairytale, Helene Woitas went to the Co-op Food Store to get a jar of sauerkraut and ended up coming home with $100,000.

Woitas’ husband, David, had initially gone for groceries but returned without the sauerkraut on the list. She went back to the store for the Prairie staple and discovered she had picked up the seventh game piece needed to win the grand prize in Co-op’s Fuel Up to Win promotion.

“I couldn’t believe it at first. I thought there would be others and there would just be a draw,” Woitas said. “That was the last surprise I expected. It couldn’t have happened at a better time.”

Woitas, who has run a daycare out of her Regina home for 35 years, and her husband have been Sherwood Co-op members for decades. They discussed using some of the winnings to complete some renovations. The rest, she said, will be put into savings to help with retirement.

More than $8.5 million in prizes and discounts were available to Co-op customers in this year’s Fuel Up to Win contest, which was held March 5 to April 29. The $100,000 grand prize is a guaranteed prize that is awarded whether or not all game tickets are found. However, Co-op customers have found the single winning game piece to defy the odds – more than one in 28 million – in four of the last five years.

“Fuel Up to Win served as a bit of a distraction this year as Co-op customers made efforts to stay home and self-isolate with the COVID-19 pandemic,” said Troy Verboom, CEO of Sherwood Co-op. “We’re excited to present the grand prize to a member of our local Co-op this year. Congratulations to Helene and her family on finding the winning game piece and thank you to everyone for playing.”

Woitas said she always enters store contests because you can’t win if you don’t enter.

“Don’t think you can’t ever be a winner,” she said. “If you’re there at the right time, that can be your chance.”