Where do our profits go?

FCL urges Unifor to stop the stunts and start bargaining

Unifor’s call for boycott no surprise, out of touch with Western Canada

FCL is here for Good

A lot can happen through co-operation.

Following the devastating wildfire in Fort McMurray, Alta., local Co-ops across Western Canada — along with their members and customers — teamed up to contribute more than $816,000 in support of the relief efforts.

In total, 55 local Co-ops from B.C. to Manitoba pitched in by collecting donations, hosting fundraisers and making in-kind contributions.

These funds include a $100,000 donation to the Canadian Red Cross from Federated Co-operatives Limited and more than 200 independent retail co-operatives in Western Canada. The donation is part of a $1 million commitment Co-op made to support emergency relief efforts across Western Canada.

Through its Communities in Full Colour program and a Buy One, Get One, Give One promotion, Co-op also donated $40,000 in paint on behalf of customers.

For more information about the Red Cross’ response to the Fort McMurray wildfire, or to donate, visit redcross.ca. 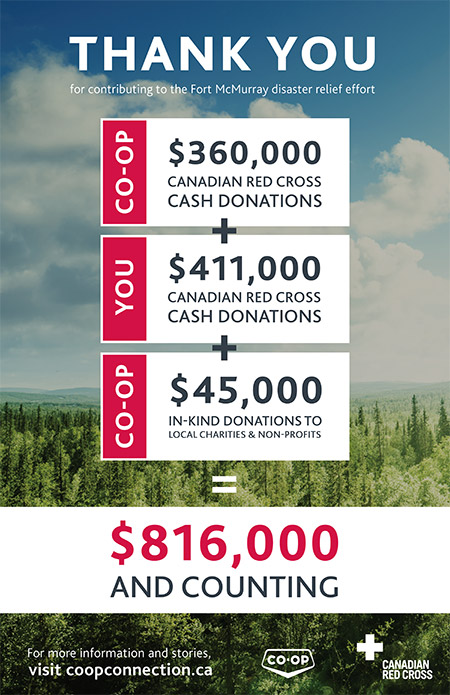