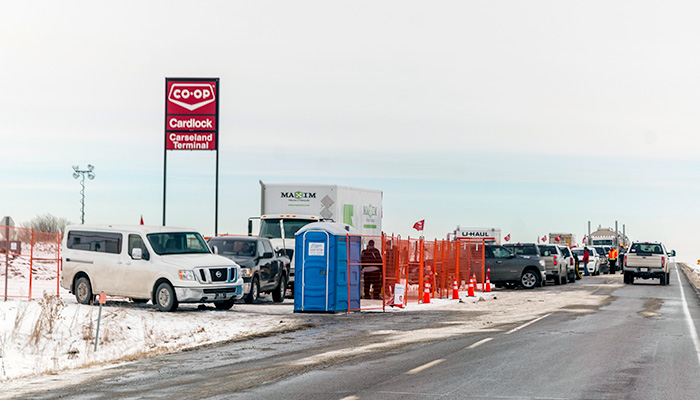 Traffic on Alberta Twp Rd 221A near Carseland, Alta., is down to one lane as Unifor activists and their multiple layers of fencing and vehicles continue to blockade FCL's Carseland Terminal, used to distribute fuel across Alberta and British Columbia.

Federated Co-operatives Limited (FCL) has stated clearly that it will not negotiate the Co-op Refinery Complex (CRC) collective bargaining agreement with Unifor again while the union maintains illegal blockades at CRC and other FCL facilities. In spite of this, Unifor has continued to blockade the CRC in Regina and, for the past two weeks, at FCL’s Carseland Fuel Terminal near Calgary.

Unifor is turning away Co-op fuel trucks so this illegal blockade has stopped the flow of fuel from this critical infrastructure facility into the rest of Alberta. Across Alberta, that’s hurting everyone from farmers preparing for seeding, to truckers hauling much-needed goods, to school buses starting their routes from the Co-op Cardlock at Carseland.

“By brazenly breaking the law in the face of law enforcement agencies and governments with these illegal barricades, Unifor is challenging the right of our business—and ultimately any business—to operate,” said FCL CEO Scott Banda at an event in Carseland today. “They’re using illegal barricades in their attempt to shut down our business and to hurt other businesses here in Alberta. We’re not going to let them set this dangerous precedent and we’re not going to bargain while they’re holding co-ops, their members, and their communities in Alberta hostage.”

Because of Unifor’s illegal blockade, this week a number of Co-op gas bars and cardlocks in southern Alberta will face periodic fuel outages. While FCL is doing all we can to prioritize deliveries to maintain critical supply, these outages will almost certainly effect smaller Alberta communities where Co-op is one of the few—or sometimes the only—source of gasoline and diesel fuel.

“This is absolutely unacceptable. Our Co-op’s members and customers rely on fuel from the Co-op Refinery Complex and the Carseland Terminal,” said Paul Haynes, CEO of South Country Co-op, based in Medicine Hat. “Our members and customers are regular people with regular jobs and businesses of the fuel they need. We continue to hear support from them, but no one can understand this union’s complete disregard for the law.”

For much of this labour disruption, Unifor has defied the rule of law by erecting illegal blockades at the CRC, FCL Carseland Fuel Terminal and other Co-op locations. They have been held in contempt of court for violating a Saskatchewan Court of Queen’s Bench order that allows Unifor to picket peacefully while allowing the CRC to continue operating safely. This Thursday, Feb. 6, Unifor will face a second contempt of court hearing related to a second Saskatchewan Court of Queen’s Bench order further defining the rules for both sides. As well, last month a number of Unifor’s members were arrested for actions at their illegal barricade.

In spite of Unifor’s illegal activities FCL, the CRC and local co-ops remain committed to fuelling Western Canada as the CRC continues to operate safely and efficiently.

“We’re here to serve the needs of our members and our communities,” said Gerald Hiebert, CEO of Central Alberta Co-op in Red Deer. “We want FCL to negotiate a deal that’s fair for both sides, without threats and illegal actions. We expect FCL to manage our investments appropriately, which means being financially prudent and considering future challenges.”

More information on the CRC’s offer and this labour disruption is available at refineryfacts.ca.