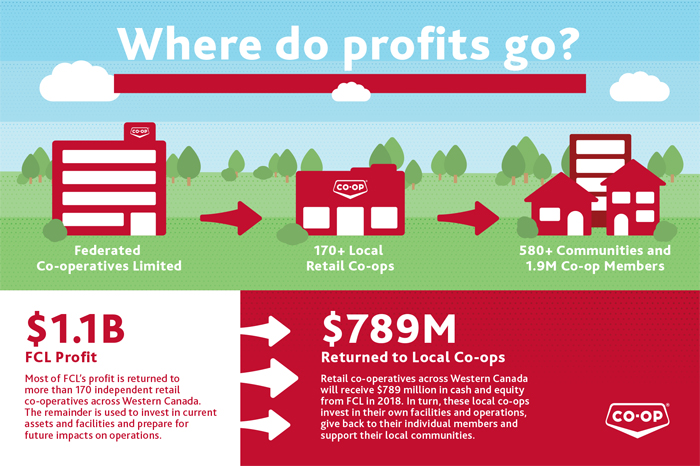 In 90 years of annual meetings, Federated Co-operatives Limited delegates have witnessed the business’s evolution. What hasn’t changed, though, is that FCL has always invested its profits in Western Canada.

In 2018, FCL returned $789 million to more than 170 local, independent co-operative associations. FCL realized record earnings of almost $1.1 billion, largely because of favourable market conditions in the energy sector, from nearly $10.7 billion in sales.

Over the past 10 years, FCL has shared $4.7 billion of its profits – known as patronage – with local co-ops.

“FCL’s profits are returned to local co-ops to use in operations or to pass on to individual members as an acknowledgement of their investment in, and support of, their local co-op,” Banda said. “ It’s a virtuous circle and it’s why we’re unique.”

The remainder of FCL’s 2018 earnings will be used to invest in current assets as well as future challenges and opportunities such as the transition to a low-carbon economy.

Last week, FCL announced a new $41.8 million investment in southern Alberta to build its third centralized fertilizer storage facility. A15-storey gasoline desulphurization splitter column was installed at the Co-op Refinery Complex in December, part of a $140 million project to reduce the amount of sulphur in gasoline.

Financial and business highlights were presented at the annual meeting and are available in FCL’s 2018 Annual Report. FCL also updated its recent history in a new book – Risk and Relevance: The Transformation of Canada’s Co-operative Retailing System by Brett Fairbairn.